ECS Engineering Services has completed the turnkey delivery and installation of a new cycle / footbridge for a supermarket distribution centre in North London. 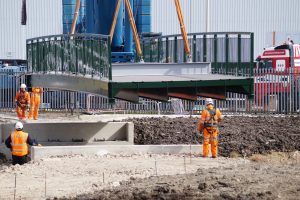 The new bridge was created by ECS taking the initial concept through design, fabrication and final delivery to produce a turnkey solution. Once the initial designs were signed off, the main civil engineering contractor at the London site prepared the concrete abutments. Meanwhile, the bridge was fabricated by ECS at their main facility in Huthwaite, Notts. before being transported to an industrial paint company in Scunthorpe.

John Cotterill, Manufacturing Operations Director, explains further: “Overall the bridge measured eight metres long by four metres wide and consisted of the main deck and a pair of hand railings that were bolted on later in the project. The main deck design had a slight camber to give it the required strength and an anti-slip surface to make sure it could be used throughout the year.

“This project has been completed to Execution Class 2 under BS EN 1090-2, mainly because the application does not include motorised vehicles. ECS has the capabilities and facilities to manufacture bridges to EXC3, with maximum vehicle weights in excess of 60 tonnes”

The completed bridge for this project weighs 26 tonnes and was transported to Scunthorpe and then on to the London site by a heavy haulage truck with an escort vehicle. The size of the bridge meant that it had to be transported under escort and the route had to be approved by the police and the highways agency. The planning for the day of installation was crucial since the local road adjacent to the new bridge location needed to be closed to allow the 500 tonne crane to be positioned.

The ECS project management team coordinated the logistics of moving the bridge components around the country, ensuring that it arrived on time, ready to be installed on a Sunday morning. The crane position was chosen by the main construction contractor and this dictated the size of crane required to install the bridge.

Martin Waldron, Project Manager for ECS, comments: “This project has required some considerable logistics to get the finished bridge installed on time and required the use of a massive 500 tonne crane. We had offered to create the bridge using fibre reinforced polymer (FRP) technology which would have produced a much lighter bridge and reduced the size of the crane required significantly. However, in this case the client felt that a steel construction was more appropriate for this particular application and so that is what we have delivered.”

The bridge spans a pond that forms the centre of a wildlife area that has been created as part of the new development and allows cyclists and pedestrians to cross the water on their way around the site. The new distribution centre is due to be fitted out in 2016 and operational by 2017.