ECS Employee Joe Mott at The House of Lords

We were then in the House of Lords at the Celebration of Apprenticeships hosted by Baroness Prasher CBE. We were greeted with tea and a delicious buffet lunch. The awards ceremony then started and there was 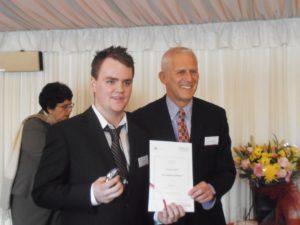 In total, 15 students received Outstanding Apprentice Awards, 13 of whom were in attendance. These 15 were chosen from 5000 possible students who were engaged in an apprenticeship at the college!

Gordon Marsden presented Joe with his certificate and glass award.

After the awards were presented, the Baroness came to talk to us and said she knew where we were from because of our accents! We then walked around the House of Lords and took many photographs including one with an armed policeman inside the House of Lords. While we were leaving the event we saw the college principal and her daughter struggling with a very large trolley filled with flower displays on the cobbled streets, so we decided to push it for them and we looked very comical pushing flowers through central London. Although the principal works at Mansfield, she lives in Chelsea, and was taking the displays in a taxi to her house.

We then went back on to the coach to go back home, arriving at the college at 9:45pm. It was a once in a lifetime, amazing day that we will never forget. We had a fantastic time. Joe’s family are all very proud of him!

Great comments from a deserved and enjoyable day out.

ECS Engineering Services have been proud of their success and awards over the past four years, winning the prestigious RoSPA Gold Award for Health & Safety and Best in Class Architectural Model for design of the roof of the student accommodation building standing opposite Wembley Park Tube Station.

Building on these successes is ever in the thoughts of Managing Director Gary Jordan – were it needs to happen – the youth of today.

Joe Mott, an apprentice at the Midlands based company, has received an Outstanding Apprentice Award at the House of Lords on Thursday 22nd March 2012 – one of only 15 students out of 5000 to be acknowledged for their work.

Gary commented, “since taking over as Managing Director in 2008, I have sought to make the Company sustainable through a recession and have a strong brand in the marketplace, allowing potential for growth.

We at ECS are as proud of Joe as both his father Gary and his sister Lisa.

Local, young talent needs to be given a chance and nurtured to quality employees for the future of our business and the economy overall.

The apprentices of today are the engineers of the future”.