As the Environment Agency (EA) continues its work to improve flood defences around the country, in the Northern region, it has chosen to install a new spillway and hydraulically actuated penstock, which will make the flood defences at Market Weighton, in East Yorkshire, compliant with the 1975 Reservoirs Act. The project included a large trash screen and a new control kiosk all of which was designed and installed by ECS Engineering Services. 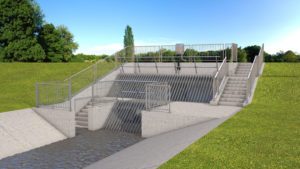 Mill Beck Reservoir is formed by the former railway embankment immediately to the north of Market Weighton. A culvert runs through the embankment, conveying the flows of Mill Beck. The existing penstock at the upstream end of the culvert causes the embankment to impound water and, if allowed to, is capable of holding in excess of 25,000 m3, which classifies the structure as a reservoir.

Following an inspection in 2008, the reservoir was assigned as ‘Category A’ (where a breach could endanger the lives in a community) and as such must be capable of safely passing the Probable Maximum Flood (PMF). The design of the embankment meant that it would be vulnerable to significant erosion if water was to overtop it and this could lead to a catastrophic dam failure.

Therefore, as part of a £3 million scheme the EA appointed Jackson as the main civil engineering contractor to design and construct a weir, spillway and a stilling basin at the site together with a new inlet structure on the culvert. The new headwall was to be constructed in front of the culvert which would be protected by a new, larger trash screen, designed, fabricated and installed by ECS.

A new cast iron penstock has replaced the old penstock and is controlled by a hydraulically powered, multi-turn actuator from Centork. ECS was responsible for the installation of the penstock and the new control kiosk, which houses the electrical controls, hydraulic power pack and telemetry and is located on higher ground to avoid the flood water.

The EA specified that the new penstock should be actuated by a non-rising spindle and a hydraulically powered motor which also provides a 4-20mA position signal back to the control panel. The actuator is IP68 rated and capable of operating while fully submerged. It can be activated remotely via the telemetry system, locally at the control panel, or manually in the event of a power failure in the area.

The new actuator is used to control the new cast iron penstock, which was supplied by Waterfront Fluid Controls, which has an agreement with ECS as its distributor and installer for both standard and bespoke water control products.

The operation of the penstock is controlled via the new control panel, which was commissioned and installed by ECS. It also acts as a marshalling point for the water level sensors used by the EA for flood warnings. These have no direct influence on the penstock, but the signals are relayed back to the central control point via the telemetry system.

The project also called for a new, larger trash screen to be designed, fabricated and installed to protect the pipe from blockage by debris carried by the floodwater. ECS has considerable experience in designing heavy duty trash screens for the EA and other agencies across the country. In this case the scheme also called for a cranked handrail to be installed above each section of screen along with conventional handrailing and security fencing around the remainder of the screen to ensure the safety of the public.

The new control kiosk was installed in an improved location compared the original, which meant that the electrical supply had to be moved and repositioned for the new kiosk. Once in position the new electrical installation had to be inspected and tested to BS 7671 with the instrumentation meeting BS 6739. All of this was arranged and completed by the ECS electrical engineers before the project was handed over to the EA.

This project was based around specifications that were provided by the EA but the details required a constant dialogue between ECS, Jackson and the EA to ensure that the final designs produced a scheme that met the requirements of the location. This included the commissioning process to ensure that the remote telemetry performed as required.

Jamie Wesley, Commercial Manager – Water Control Division at ECS comments: “This is an important project for the local area and it is vital that we install a reliable system with the minimum of impact on the surrounding area. This new actuator, the design of which allows it to operate while submerged, combined with the Waterfront penstock provides an excellent solution.

“In the event of storm water being retained in the reservoir it is now possible for that water to be released in a controlled manner, to avoid any flooding further downstream in Market Weighton.” 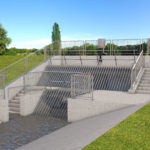 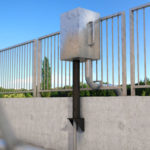 The actuator is IP68 rated and can be activated remotely via the telemetry system, locally at the control panel, or manually in the event of a power failure in the area