As part of a £3 million investment, Northern Ireland Water is upgrading the equipment at Luke’s Point pumping station with the installation of two new Archimedes screw pumps, supplied by ECS Engineering Services. Installed in the same footprint as the original equipment, the new pumps will double the capacity of the site, reducing the risk of flooding and helping to meet Northern Ireland Environment Agency standards for water quality. 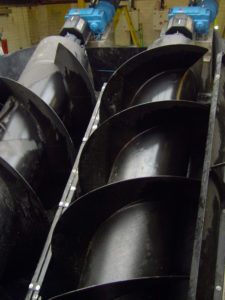 This significant investment is aimed at improving the water and sewerage infrastructure in the Bangor area in order to improve the operation of the existing network. The improvements to the Luke’s Point pumping station will increase efficiency and reliability while reducing the maintenance costs of the site.

The existing screw pump arrangement at Luke’s Point had reached the end of its design life and was no longer efficient. The screws themselves were heavily worn and the drive system was in need of improvement in terms of efficiency and reliability. As a result, a contract was issued for the replacement of this equipment and it was awarded, in part, to ECS and its partner Landustrie, a leading manufacturer of Archimedes screw pumps.

Jamie Wesley, Commercial Manager for the Water Control Division at ECS comments, “We have worked closely with the client to realise the objectives of the project by designing a complete pumping solution. The new installation will use direct drive gearboxes, powered by 45kW motors, to turn the new Archimedes screws which are housed in steel liners.

“Increasing the capacity of the pumping station while remaining within the original footprint required some innovative engineering – the key aspect was to increase the diameter of the screws – which required the removal of the original concrete dividing wall. This provided sufficient space to install the pair of larger screws, housed in steel troughs to provide optimum pumping efficiency.”

The new installation includes the Landustrie ECO-Friendly stainless steel, lower bearings which are sealed for life and require no annual maintenance. The design of the bearing allows for 3-dimensional self alignment, which absorbs the expansion and contraction of the screw in changing temperatures.

Legacy installations such as Luke’s Point used poly v-belts to transfer drive from the motor to the gearbox, in part to lessen the shock loading on start up. With the introduction of variable speed drives (VSD) and improved drive couplings it is now possible to use direct power transmission which offers around 5% energy savings in addition to those provided by the VSD.

Jamie Wesley concludes, “The new screw pump installation has been designed by Landustrie, specifically for this project and it will deliver significant savings in both energy costs and maintenance costs for the client. Capable of pumping 1,200 litres per second each, the increased capacity compared to the original will go a long way to improving the ability of the station to deal with periods of increased rainfall.” 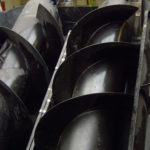 The new installation will use direct drive gearboxes, powered by 45kW motors, to turn the new Archimedes screws which are housed in steel liners 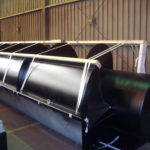 The new screw pump installation has been designed by Landustrie, specifically for this project and it will deliver significant savings