Natural Resources Wales (NRW) has upgraded one of its drainage pumping stations with the introduction of a new Archimedes screw pump retrofitted alongside 2 existing axial flow submersible pumps. The project was designed and installed by ECS Engineering Services, UK supply and service agents for Landustrie, with initial energy consumption figures showing a reduction of over 40% compared to the original arrangement. 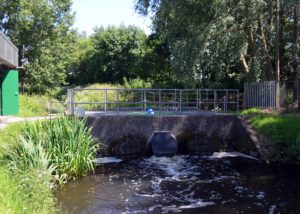 With responsibilities to maintain almost 2,000 miles of flood defences, main rivers and more than 4,000 sluices, outfalls, floodgates and barriers, Natural Resources Wales has a great deal of involvement in the waterways of Wales. Part of its responsibility is to maintain the drainage systems and ensure that they operate as efficiently as possible.

Under this remit, NRW commissioned ECS to install a new, more efficient, fully compact, Archimedes screw pump at a site near Newport, Gwent. The project also included replacement of the flap valve mechanism, which ensures a one way flow of the drainage water and can prevent any tidal water from the river Severn from entering the freshwater channels.

In partnership with Landustrie, ECS worked with NRW to design an environmentally sympathetic pumping system that would not only be more energy efficient, but also fish friendly, a feature not associated with traditional submersible pumping systems.

The pumping station now uses three pumps on a duty / assist / standby basis to maintain the local water levels with the new pump system providing duty capacity. The difference in water levels between the upstream and downstream sections is less than 1 meter which means that the submersible pumps would operate for a short period at regular intervals and so were proving very expensive to run in this application.

The Archimedes screw pump is ideally suited to this application and it is used by many utility companies and government agencies across the UK to provide a cost effective solution in maintaining water levels. By using the screw pump as the primary pump, it can be allowed to operate for longer periods, keeping the remaining submersibles in reserve in case of greatly increased flows during storm conditions.

The final design used a 1 meter diameter screw located in a compact trough, which was delivered to site as a compact, fully assembled unit. This meant that there was no need to modify the existing concrete structure and reduced the overall installation time.

Due to the nature of the site it was not possible to lower the water levels sufficiently to allow a conventional ‘dry’ installation. In this type of situation, ECS used one of its certified underwater dive teams to install the sub frame under water which allowed the main assembly to be craned into position and fixed into place. This approach also meant that the local water levels remained unaffected throughout the project.

The Archimedes screw pump is powered, through a variable speed drive, by a 5.5kW motor, connected to a reduction gearbox which enables it to pump up to 0.2m3/second, which is more than sufficient for the normal flows at this station.

Initial calculations suggested that the new screw pump should deliver an energy saving of 40%. However, Natural Resources Wales wanted confirmation of this and so the actual energy savings were closely monitored over a 6 month period and compared to the submersible pumping system, the Archimedes screw pump is in fact delivering a 44% energy saving.

Jamie Wesley, Commercial Manager, Water Control Division at ECS, comments: “This project demonstrates just one of the many applications that can benefit from the energy saving design of the Archimedes screw pump. Natural Resources Wales has been very impressed by the real world savings and is looking at installing more screw pumps in similar applications.”

The final part of the project was to replace the existing cast iron flap valve with a High Density Polyethylene (HDPE) version designed and manufactured by Waterfront Fluid Controls, with whom ECS also has a partnership. The new flap valve will ensure the complete installation will provide a durable and efficient pumping solution for many years to come. 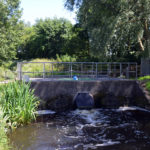 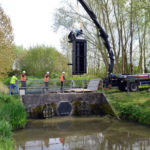 The final design used a 1 meter diameter screw located in a compact trough, which was delivered to site as a compact, fully assembled unit 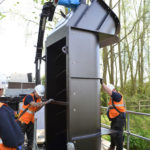 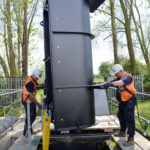 The Archimedes screw pump is delivering a 44% energy saving 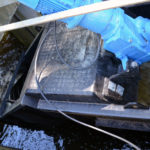 The Archimedes screw pump is powered, through a variable speed drive, by a 5.5kW motor