The Department for Environment, Food & Rural Affairs (DEFRA) has continued to award funding to local councils across the country to help with improving flood prevention measures. For Rotherham Borough Council this has enabled them, with the help of the Environment Agency (EA) and ECS Engineering Services, to install new trash screens as part of a series of flood alleviation schemes. 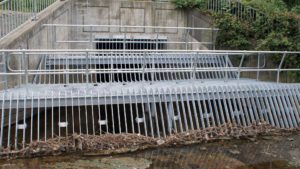 Protection measures, such as flood doors are the last line of defence in flood events; it is better to remove bottle-necks in the watercourse and, where possible, prevent the flood conditions. Following two major flood events in 2007 and 2009, the EA has been working with local councils in South Yorkshire to reduce the likelihood of future events with the installation of new trash screens.

Many smaller watercourses often transit through built-up areas in culverts which are designed to cope with high water flows, however the entrance to the culvert can become partially blocked with debris. Under normal flow conditions this poses a low risk but flood conditions not only bring high volumes of water but also a great deal more debris.

ECS Engineering Services has a dedicated water control engineering division, which has over 25 years’ experience in delivering turn-key projects for a wide range of clients including the Environment Agency, Water Utilities and Internal Drainage Boards. In this case ECS was contracted to design, fabricate and install two new trash screens on Brook Dike to the north of Rotherham.

The proper design of the screen is essential in order to prevent it becoming a flood risk in itself. This design should include careful consideration for the bar spacing, screen angle and distance from the culvert entrance. Combined with the EA’s specifications and local requirements, the final designs were approved by the EA before the fabrication process began in the ECS facility.

The first installation required a single tier, three-sided screen with an access ladder and perforated platform fitted with hand railing, all of which was fabricated and assembled in ECS’s Huthwaite premises. The new trash screen offers a much greater surface area for the water to flow through, even if a large amount of debris has been captured, which ensures that the increased water flow can still enter the culvert.

The second installation was a much larger, two tier screen that was designed to fit within the existing concrete wings of the culvert entrance. Once again this design offered a greater surface area than the original screen as well as additional access platforms to allow the collected debris to be removed.

In each case the screen bars were manufactured in sections using the bar spacing specified by the EA, and then bolted together on site. All of the steelwork is welded in accordance with BS EN 1011 before it was galvanised to BS EN ISO 1461. All of the support structures and open grid flooring sections were designed to support a fully loaded screen, while the cranked hand railing makes the task of clearing the debris much easier.

Andy Swindells, Project Manager for ECS, comments: “There is a lot of design work that goes into producing trash screens such as these. Apart from following the EA specification, we have to be certain the whole structure and the anchor points to the culvert will have sufficient strength to remain in place for many years to come.

“The actual construction process has been simplified by fabricating the components in small modules that can be easily transported and assembled on site. The completed structures will certainly improve the flow of flood water and alleviate some of the problems that have been seen in the past.” 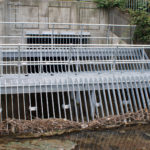 The second installation was a much larger, two tier screen that was designed to fit within the existing concrete wings of the culvert entrance 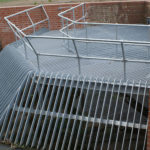 The first installation required a single tier, three-sided screen with an access ladder and perforated platform fitted with hand railing 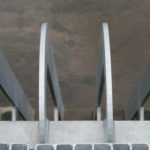 In each case the screen bars were manufactured in sections using the bar spacing specified by the EA, and then bolted together on site