Residents and business owners in Fishergate in the centre of York are celebrating the completion of Phase 1 of the Foss Barrier upgrade project, which will protect them against winter flooding. Fabrications for the £17m project have been undertaken by ECS Engineering Services.

The barrier was built in the 1980s in response to a particularly bad winter and has saved the area from many possible floods. However, 2015 was so wet that the defences were overwhelmed and many buildings were flooded out. In response to this and with the expectation of climate change bringing warmer but wetter winters, it was decided to look at ways to increase the capabilities of the installation. 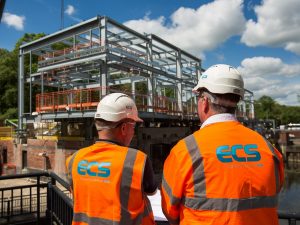 Andy Swindells, ECS’s project manager for the Foss job, explains: “Two rivers, the Ouse and the Foss, flow through York and after a lot of rain the Foss can back up into the Ouse so that it overflows its banks to cause disruption and sustained flooding. The confluence of the two rivers is a pinch point where flooding is most likely to occur.”

The basic working principle of the installation is to drop a barrier into the Foss and to activate pumps to divert its waters into an overflow culvert. The culvert then carries water downstream to be released into the Ouse where it is wide enough to accommodate the extra flow.

An engineering survey showed that the barrier itself was generally in good working order and remained effective even after 30 years of service. It was decided to raise some of the embankment walls and replace all eight of the transfer pumps to increase total capacity 33% to 40 tonnes per second. It was also decided to relocate the control and operations room to a higher floor, above likely flood levels.

To accommodate these, ECS was commissioned to fabricate a steel framework that effectively added an extra storey to the barrier’s operations building. The frame required 100 tonnes of steel, and fabrication was completed at ECS’s state-of-the-art production facilities in Sutton-in-Ashfield. It was then transported 60 miles up the busy A1, through the suburbs of York and onto site. Here, ECS’s experienced erectors soon had the frame in place and fully assembled ready for cladding and fitting out.

Significantly, the barrier had to remain in operation throughout all these processes and careful scheduling made sure that the normal town centre activities were hardly disrupted at all.

The second and final stage of the project will be completed in the New Year. It will involve a new power supply being installed and, critically, the new high level control room will be brought into operation.

Andy Swindells concludes: “Naturally on a job of this size you expect a few changes to the plan along the way. Fortunately, we have the capacity and resources to accommodate any last-minute changes and still deliver the project on time.

“We, along with all the other contractors and organisations involved in the Foss Barrier renewal, worked hard so that we avoided any delays that would have left the centre of York vulnerable to the effects of a wet winter.” 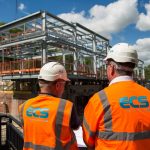 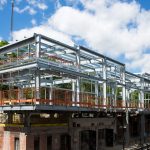 The frame required 100 tonnes of steel, and fabrication was completed at ECS’s state-of-the-art production facilities in Sutton-in-Ashfield 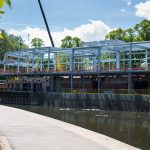 ECS Engineering Services was commissioned to fabricate a steel framework that effectively added an extra storey to the barrier’s operations building.