Engineers from the Environment Agency (EA) have been able to inspect the first InfraCore road bridge made using fibre reinforced polymer (FRP) after it paused on the River Thames outside Environment Agency offices before continuing on to the installation site at Mapledurham. The 13 metre long bridge, which weighs less than 13 tonnes, was being transported to the weir and lock complex using floating pontoons.

The project is being delivered by ECS Engineering Services, which is the exclusive UK agent for FiberCore Europe, the company behind the proprietary technology which has been patented as InfraCore Inside. Despite its lightweight design, the construction of the bridge makes it strong enough to support up to 60 tonnes, more than enough for the installation in Mapledurham.

The delivery of the bridge included a planned stop at the local Environment Agency offices where representatives from FiberCore Europe explained the benefits of the InfraCore technology. Apart from bridges, this innovative and lightweight material has been successfully used for manufacturing lock gates and moveable bridge decks, with over 400 installations across Europe.

Jamie Wesley, Commercial Manager, Water Control, at ECS, comments: “The design of this bridge has a number of advantages specific to the client’s scope at Mapledurham, including a short order-to-installation time and the ability to deliver it to site by river. The local road network is not suitable for transporting a 13 metre bridge by truck, so using the pontoon is ideal.”

The new bridge will replace an ageing structure that has insufficient capacity for modern vehicles and so enable the Environment Agency to complete a larger refurbishment project of the local lock complex. The inherent strength of the design is complemented by a minimal requirement for maintenance and an expected lifetime of 100 years, which is supported by a 50 year warranty on the construction and even a 10 year limited warranty on the wear surface. 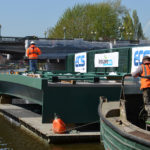 The lightweight nature of the Fibre Reinforced Plastic (FRP) bridge deck meant it could be easily floated down the Thames ready to be lifted into position, avoiding the cost and inconvenience of road transport.