As part of a £1.8 million investment in the refurbishment of a number of its assets along the River Thames, the Environment Agency (EA) has replaced the lock gates at both Romney and Marlow. This complex part of the project was delivered by ECS Engineering Services as a turnkey solution that involved considerable in-house design and steel fabrication work. 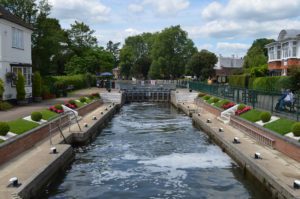 The existing lock at Marlow was rebuilt by the Thames Conservancy in 1927 and since then the only improvements have been routine maintenance work and the addition of electrical power to make gate operation easier.

Romney Lock was opened on the present site in 1797 and built of oak, but it was later rebuilt by the Thames Conservancy in 1869 and the weir was rebuilt further upstream at the beginning of the 20th century. The lock was rebuilt again in 1979/80 and currently this structure, along with most of the locks on the River Thames, continues to be maintained by the Environment Agency.

The lock gates at both locations had been independently inspected and assessed for the Environment Agency, along with several other sites. On the whole, it was deemed that the best course of action was to continue with maintaining the lock gates, but it was considered more cost effective to replace the lock gates at Romney and at Marlow.

Clearly, as steel fabricated product, these new lock gates would need to be manufactured according to BS EN 1090 and carry the CE certification, under legislation that came into force in July 2014. ECS has achieved the required accreditation which demands a comprehensive quality system and traceability of all the components within a structure as well as regular training of engineers. With annual reassessments this essential certification also serves as an excellent benchmark that must be met before the Environment Agency will award any fabrication contracts.

For specialist projects such as this the Environment Agency relies on experienced contractors, such as ECS, that have the skills and the facilities to deliver the complete project, from start to finish. In this case the Environment Agency had specified the new gates to be constructed from steel which, with the correct marine protection, would provide a strong and durable solution with a design life of 80 years. Under the current European standards, this installation was classed as EXC2, well within the abilities of the ECS engineers which have achieved certification up to the more rigorous EXC3, which includes buildings and bridges.

Measurements were taken from the original wooden gates and information from historical drawings was used to create the designs for the new steel gates. Of crucial importance were the hinge points and the mitre join between the gates that must be correct to ensure reliable operation and a watertight joint.

Jamie Wesley, Commercial Manager, Water Control, at ECS comments: “Lock facilities such as those at Romney and Marlow provide a vital service that enables boats to travel along the Thames. Our task is to manage the entire project and deliver a renewed facility with the minimum of inconvenience to the general public.

“To achieve this, the work at both sites was carefully coordinated with our design teams, on-site engineers and our steel fabrication facility along with several third parties, such as the galvanisers. Our experience in working on large water control structures has proven invaluable in assessing the complications and providing solutions, resulting in a timely completion.”

A set of head gates and a set of tail gates were manufactured for each site at ECS’s Huthwaite steel fabrication centre before being galvanised. However this was no small task, with the Romney gates almost 6m high metres high and weighing in at almost 10 tonnes per leaf, there was only one galvanising plant in the UK capable of dealing with these sizeable structures.

The gates were hot-dip galvanised, which ensures that the gates were coated both inside and outside, providing long term protection against corrosion and an ideal base protection for equipment that will be underwater for long periods. The Marlow gates were protected using a hot-sprayed zinc in order to achieve the same level of protection.

Jamie Wesley concludes: “The completed lock gates were installed using barge mounted HIAB cranes and a dive team was on hand to assist with the positioning of the gates on the hinges. The final step was to check the seals between the gates and around the sluice doors which was again completed by the dive team, with underwater video used to prove that all was in order.

“ECS has coordinated and managed the entire process from initial design through to the final handover and now the general public can look forward to many years of uninterrupted travel through these locks. 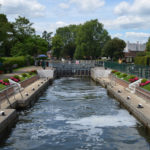 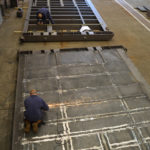 Detail work being completed on the gates 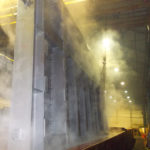 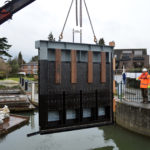 Gates being installed on site by ECS