In a year when summer droughts reduced water stocks to levels not seen for nearly 50 years, the renewal and modernisation of the Great Ouse Groundwater Scheme has been a timely project. Mick Smith, a project engineer with ECS Engineering Services, explains how a number of borehole sites have been inspected and repaired to improve the resilience of the network.

The River Great Ouse Groundwater Scheme consists of 26 borehole sites that raise water from the water table, 15 of which, all below the town of Bedford, are operated by the Environment Agency. In January 2018, the Agency asked ECS Engineering Services to conduct a condition survey of the boreholes and to help devise an appropriate strategy for their refurbishment and continued maintenance. Subsequently, ECS was asked to complete a fairly major refit of one of the boreholes, including a new motor control centre and pump, plus ancillary work, all of which will be completed by December 2018.

The current path of the Great Ouse is not 100% natural; parts of it were rerouted as early as 1240, with many subsequent modifications following. As a result, it has been known to both overflow in winter and dry out in summer, hence the need for boreholes and water management schemes. Victorian engineers worked to make large stretches of the river navigable so that crops and industrial products could be transported. Today, the commercial traffic is long gone but there is an on-going effort to open up more and more of the river to leisure users, who make a significant contribution to the local economy. 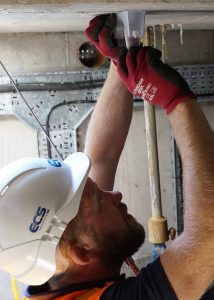 Many of the current boreholes were sunk following the long hot summer of 1976, when much of East Anglia suffered from such severe water storages that domestic supplies were restricted and householders had to use standpipes in the street. A lot of the technical equipment has been renewed more than once since then, but inevitably was not fully state of the art. For instance most of the motor control centres were based on auto-transformers, a technology that while robust and effective is now being superseded by solid state digital alternatives.

The ECS condition survey identified the technologies used at each site and also assessed the structural and civil elements such as walls, sumps and plinths.  Importantly access arrangements were checked for safety and the security provided by fences lock and gates was confirmed.

In fact, the electrical equipment needed specialist assessment, so ECS brought in Fairfield Controls to help. ECS carried out mechanical and civil engineering surveys that detailed areas of concern for each borehole site, including as appropriate, signage, fencing and security, civil structures, trees, other vegetation and landscape, site access, pump chamber and its access, pumps and associated pipework. This information was combined into ‘as built’ drawings produced in the ECS drawing office with Fairfield Controls’ survey of the motor control centres, lighting and wiring to provide the Environment Agency with a full picture of each borehole, its condition, the remedial work required and the potential for redevelopment.

With all this information the Environment Agency decided to extend ECS’s involvement to include some remedial works to make sure all the boreholes were safe. It was also decided to fully refit one of them, Hatchet Plantation, thus making it probably one of the most technologically advanced boreholes in the country.

This required the installation and commissioning of a new 59 kW pump and a new solid state motor control centre, complete with a soft-start that will reduce mechanical shock loads on start-up, thus protecting both mechanical and electrical equipment. It will help also minimise harmonic corruption of the mains supply, which could otherwise affect other nearby equipment.

Other works to improve the site were also undertaken, such as repairing masonry and fencing, trimming vegetation, new signage and installing new lighting to improve the safety of operators who may be called out during the hours of darkness. All this work was completed under the Anglian-Midlands MEICA Framework Deed of Agreement, which defines general procedures and standards for such work.

The new motor control centre is due to be installed in December 2018, so that the Hatchet Plantation borehole will be fully operational well in time for the summer of 2019 and the Great Ouse Groundwater Scheme will be able to cope with all expected situations. Notably, the Environment Agency will be in a position to ensure that it is able to provide pumped water not only to local river catchments, but also further afield to other river catchment areas during dry summers, should that be necessary.