Peakirk Pumping Station, situated on the juncture of the Rivers Welland and Folly, has benefitted from a comprehensive refurbishment of its mitre gates carried out by ECS Engineering Services. Appointed by the Environment Agency to complete the project, ECS was able to boost the flood defence capabilities of the station with uprated gates despite facing a number of challenges. 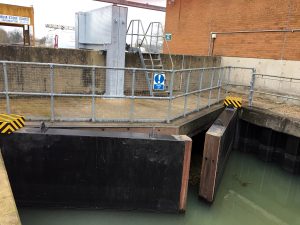 Peakirk Pumping Station, has benefitted from a comprehensive refurbishment of its mitre gates carried out by ECS Engineering Services.

The main proviso of the project was to provide an improved barrier in a flooding event, as Peakirk protects a number of properties upstream from fluctuations in water level. The existing wooden mitre gates were showing signs of wear after many years of service, so to carry out refurbishment work, they needed to be removed and transported to ECS’ fabrications centre in Nottinghamshire. However, accessing the gates was a considerable challenge, as the central sluice required dewatering and damming before work could begin in earnest.

Typically the existing stoplog at the station would have been sufficient to isolate the gates, but a dive inspection of the central sluice area discovered that the existing stoplog guides were in a poor state of repair. In order to continue the project, ECS installed a GEO dam via diving contractors capable of holding back a depth of water up to 3 metres – the largest of its type installed in the UK. Now dewatering could continue, which, once complete, would allow ECS access to the doors.

Another consideration was the control system that would actuate the new gates. Utilising its dedicated design studios, ECS blueprinted a weight stack counter balance system to provide control. Due to its large fabrications capacity, ECS was also able to manufacture the entire system in-house, offering a fully integrated approach to design and production.

While the gates were being refurbished and re-painted at the workshop, ECS turned its attention to the mounting posts. The posts were also worn, so the decision was made to commence with a complete replacement. New posts were installed, and subsequently trimmed to length to suit the refurbished gates upon delivery. Finally, the doors were fitted and integrated with the counter balance control system, with the new gates now ready to offer protection during flooding.

“We wanted to provide the Environment Agency with a new, maintainable asset at the pumping station while simultaneously uprating the flood defences,” Jamie Wesley, Contracts Manager at ECS explains. “This goal has been achieved within months of the initial contract win, a lead time that has been enabled by our integrated approach. By combining fabrications workshops, design studios and project coordination in-house – we are able to offer an increased speed of response and consistent quality.”

ECS Engineering Services is an appointed framework contractor to the Environment Agency, due to a focus on providing high quality engineering solutions and an emphasis on conducting works in an environmentally friendly manner. The fabrications and water control specialists regularly work with government agencies, water boards and similar associations to boost water control infrastructure across the UK.