Maintenance of the waterways within the Somerset Levels is a crucial aspect of flood defence work in the area and the Environment Agency (EA) has recently completed a construction project on a 4km stretch of the River Parrett as part of this scheme. ECS Engineering Services has supplied and installed a new tilting weir as part of the water level control system, which now provides an improved flood defence and more reliable operation compared to the legacy equipment. 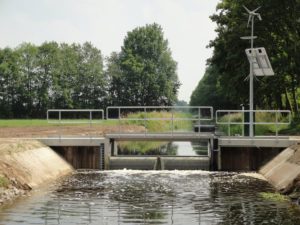 The area around Stathe and Combe in Somerset is drained by a series of rhynes, or ditches, to allow the local grassland to be used for livestock grazing. These ditches form the first stages of the local drainage scheme which ultimately discharges into the river Parrett, which has a man-made, embanked flood relief channel running alongside it called the river Sowy.

The EA project aimed to raise some sections of riverbank to ensure any weak spots were strengthened as well as repairing any sections which had suffered from scouring and in doing so improve the overall performance of the local flood defence scheme. It was delivered by Black & Veatch, working with Interserve, which was responsible for the construction aspect of the project.

In order to improve the water level control in the drainage system, a new tilting weir was specified and Interserve approached ECS Engineering Services to design, develop, manufacture and install the new structure. With over 25 years experience in the design and fabrication of water control products, ECS’s Water Control division, working in tandem with ECS Fabrications and ECS Site Services used products from supply partner Waterfront Fluid Controls to deliver the bespoke structure.

A spokesperson of the project team for Interserve comments, “There were lengthy discussions over the design of the tilting weir, with the ECS engineers providing professional advice on the various options, which resulted in the best solution being agreed. The association with Waterfront provided the reassurance that the bespoke design could be delivered on time with the expertise of the ECS site engineers.”

The timing of the project was crucial since the construction engineers from Interserve were providing temporary dams either side of the installation site to allow repairs to the existing wing walls and the new tilting weir to be installed under dry conditions. This temporary measure also included the use of a bypass pipe to ensure that the water flow could be maintained, even with the dams in place.

With the site prepared, ECS delivered and installed the tilting weir as well as installing the hand-railing to allow safe access to the controls. The installation site was classed as a confined space due to the risk, albeit small, of water entering the area, as well as the potential for harmful gases to be emitted from the river bed. Working with the appropriate precautions and equipment, the ECS engineers completed the whole installation in two days.