Starting in November 2013 and finishing in March 2014, Network Rail will be carrying out major engineering work to strengthen and repair Holme Tunnel between Hebden Bridge and Burnley. A key part 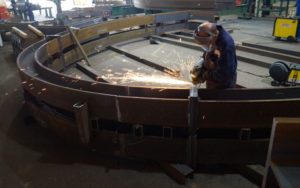 of this work has been the bending and fabrication of all the structural steel for the project, nearly 100 elegant but extremely strong arches made specifically to fit inside the tunnel which has been pushed out of shape over the years since its creation.

Network Rail is carrying out a programme of work to repair and strengthen the 250m long Holme Tunnel near the village of Holme Chapel. Over time, movement of the ground around the tunnel has led to the tunnel lining becoming distorted. A 20mph speed restriction is currently in place for trains running through the tunnel, but remedial work is needed to make sure trains can return to using the tunnel at the usual 45mph in future.

As well as relining and strengthening sections of the tunnel, allowing the speed limit to be raised to 45mph, Network Rail and its engineering partner AMCO, will also be laying new track and installing new drainage. The main contractor for the structural steelwork is Barnshaws, a world leading section bending company based in the UK. Barnshaws specialise in cold bending large sections of structural steel and pipe and required a quality fabricator with enough capacity to handle 90x steel arch supports. 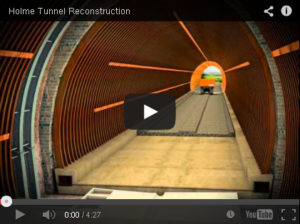 al arch support pieces, flanges and feet as component parts. Using its drilling, welding and finishing facilities, ECS was over half way through the assembly and construction of the archways by October 2013.

By using a trusted supplier to weld, assemble and finish the structural steel arches, the primary contractor was able to outsource a crucial part of the project which allowed it to concentrate on sourcing the materials and components and the bending part of the process which it specialises in for large civil and architectural projects.

John Cotterill, ECS Fabrication Director comments, ‘As two truly international businesses it’s easy to see how our two companies worked well together; Barnshaws, having just completed the world’s largest ever cold bent arches for the Sopot’s Forest Opera in Poland and ECS having just completed the supply of structural steel fabrications for the new and stunning Paris Philharmonic building.’

‘The final elements of this part of the Holme tunnel project will be despatched from ECS in December, by operating a delivery and collect service between the main contractor and ECS the efficiency of moving the materials around has also been maximised. In addition to using the key service offerings of both businesses to their maximum operational efficiency, the project costs have also remained under control and we have been able to guarantee both timing and quality.’

ECS was also able to provide added value to the order by passing the initial drawings through the experienced ECS design office, converting the drawings to CAD files and double-checking all the dimensional details for the bespoke curved arches that are being created. By doing this work before fabrication began the end customer, Network Rail, was able to confirm shapes and tolerances before steel was welded, providing an additional layer of reassurance for the customer, especially important since the task is retrofitting supports to an old and slightly oddly shaped tunnel. 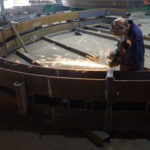 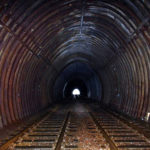 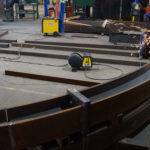