In the wake of the recent flooding events, many district and local authorities are faced with the challenge of replacing large numbers of damaged and broken bridges as soon as possible.  Speed of repair and returning life to normal quickly is vital in the aftermath of these challenging situations. This is especially so for key transport routes across damaged bridges that has left communities separated or key transport arteries impassable, with inevitable knock on effects to access and on-going commercial activity. 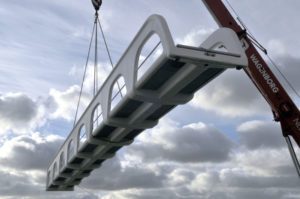 ECS Engineering Services has recently installed new bridge technologies and designs that have proven to be highly successful, both in the UK and across Europe. The bridge designs use a material called InfraCore® Inside, which utilises advanced FRP composites to provide the required strength and safety standards, but equally importantly, the capability to manufacture and install bridges quickly.

Clarke Williamson, Director of Contracts for ECS commented, “Utilising standard designs for the InfraCore® Inside bridges means that we have been able to manufacture and supply complete bridges in as little as three weeks for small standard units or only 5 weeks for longer or heavy traffic designs. Which, given the current challenges that some areas are facing, could be vital in getting these communities operating and back to normal as quickly as possible.”

Bridge repair and replacement can be costly, complicated and above all time consuming; requiring considerable engineering expertise, project management skills and often innovative approaches to highly challenging circumstances, which were never envisaged when the bridges were first built. However, it also provides an opportunity to utilise new innovations and technologies that may be better suited to changing weather patterns.

InfraCore® Inside bridges come fully prefabricated, in any colour. They are finished with an epoxy-bonded wear surface that doesn’t rot, corrode or degrade over time. Multiple bridge segments can be joined to create a variety of bridge widths. When required, bridges can also be constructed in conjunction with other materials, such as using an InfraCore® Inside deck on a primary structure in steel or concrete. This combines the best of both materials. Due to the use of these innovative composite materials the bridges come with a 50 year guarantee and have been tested to survive for 100 years.

The low weight of InfraCore® Inside bridges bring a number of considerable advantages. One is that only a simple foundation is needed, often a shallow foundation suffices, such as a precast concrete slab. InfraCore® Inside bridges are easy to transport and can be installed quickly with a light crane. Also, since the bridges float, they can be transported to the project site on the water, which is especially advantageous in restricted areas where access via road is prohibitive.

All of these are considerations which will be important to local and district authorities working hard to get their local communities operating successfully again as quickly as possible. 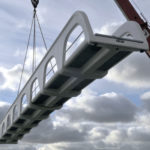 Prefabricated Infracore™ Inside foot bridge being lowered in place 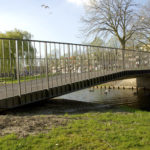 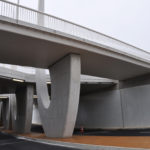 Large Infracore™ Inside bridge installation over a motorway 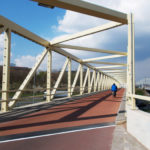 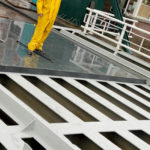