Bridge maintenance and repair is essential to providing safe access across obstacles such as rivers and streams. For the Environment Agency, any replacement needs to provide long-term durability as well as being cost effective, which has led to the increasing use of fibre reinforced polymer (FRP) structures delivered by ECS Engineering Services. 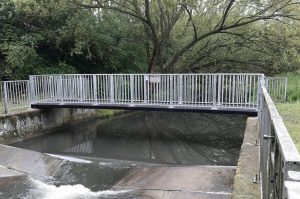 The Environment Agency carefully monitors the levels of rivers and streams throughout the UK, in many cases using level stations located adjacent to the watercourses. From time to time, Environment Agency staff require access to the level stations, some of which have a bridge access that is designed to provide safe passage over the river and also prevent unauthorised access by the public.

A recent audit identified the access bridge in Enfield as in need of repair or replacement, but the site itself is quite small and access to vehicles is restricted, which presented more of a challenge for the project.

As an appointed framework contractor for the Environment Agency, ECS Engineering Services can be called upon to carry out such work, as was the case at this site. The initial request from the client was to appraise a refurbishment of the existing bridge, but the value engineering study carried out by ECS confirmed this would not offer the lowest whole life cost solution; the steel structure was heavily corroded and a considerable amount of work would be required just to deliver a short-term solution.

As a champion for the new generation of FRP products, including bridges, from Fibercore Europe, ECS has considerable expertise in specifying this innovative material for a range of applications. As such, the installation of an FRP bridge would offer excellent durability, negligible maintenance requirements and the installation could be done in just a few days.

Having agreed the design of the bridge, including new handrailing and gates at each end, the project was carefully planned by Project Manager Stephen Rumsey: “We were aware that the confines of the site would rule out using a mobile crane to position the bridge but the lightweight design of the FRP structure allowed us to use an industrial telehandler, which would be much more manoeuvrable.”

The new bridge was manufactured by Fibercore Europe in a single-moulded piece measuring 9 metres by 1.5 metres, with an integral, factory-applied, anti-slip surface bonded to the deck to ensure safe passage, even in the depths of winter. At the same time, the new handrailing was manufactured and galvanized ready for installation.

Stephen Rumsey continues: “Removal of the old bridge was quite straightforward, although we did have to disconnect the electrical supply to the level station because it was attached to the bridge structure. The station was only offline for a couple of days while we replaced the bridge and reconnected the supply. This would have been significantly longer if the refurbishment option had been selected.”

The new 9 metre-span bridge weighs only 1,000 kg and was easily positioned by the telehandler before being fixed into place. The lightweight construction also allowed the existing abutments to be used again, after validation by a structural engineer. Soon after installation, the new handrailing was fitted and the site was made secure.

The inherent strength of the new bridge is complemented by a minimal requirement for maintenance and an expected lifetime in excess of 100 years, which is supported by a 50-year warranty on the construction and even a 10-year limited warranty on the wear surface. 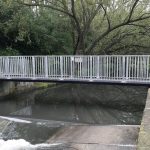 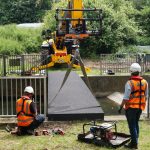 The new bridge was manufactured by Fibercore Europe in a single-moulded piece measuring 9 metres by 1.5 metres, with an integral, factory-applied, anti-slip surface bonded to the deck to ensure safe passage, even in the depths of winter. 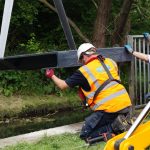 The new 9 metre-span bridge weighs only 1,000 kg and was easily positioned by the telehandler before being fixed into place.