Highways England has signed a framework agreement with ECS Engineering Services to inspect and maintain several drainage pumping stations in Derbyshire, Nottinghamshire and other parts of the East Midlands.

The principle purpose of the pumping stations is to provide a resource for surface water management. This includes the relatively rare occasions when there is the possibility of significant flooding, for which reason the agreement makes provision for emergency call out services. 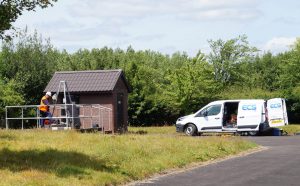 The agreement is initially for three years, with the possibility of extensions beyond that. It is the first framework agreement ECS has signed with Highways England, but the company has considerable experience with other frameworks with, for instance, the Environment Agency.

ECS Engineering Services has built its business on designing, building and maintaining environmental infrastructure for industries such as water treatment, energy distribution and the railways. It has many land drainage projects under its belt, so considerable experience relevant to assets of this type.

As part of the agreement, ECS will make sure that appropriately skilled personnel will attend the site of any emergency within three hours of the initial call-out. Further, to minimise disruption to local traffic, ECS will arrange to conduct inspection and maintenance visits at night with temporary traffic management if required.

Steve Crapper, Business Development Manager for ECS, says: “It is very easy to take the national road network for granted, but in reality, it takes a lot to maintain it and keep vehicles moving. With the M1 and several major trunk roads within the award area, this new framework agreement with Highways England is a major responsibility and one that we are extremely proud to service.”