ECS Engineering Services has won a prestigious Environment Agency Health and Safety Award for the way it designed and implemented critical safety systems into a project to refurbish the extensive steelwork at Colwick Sluice on the River Trent.

As a vital part of the Nottingham area’s flood control infrastructure, Colwick Sluice consists of five steel vertical river control gates, each nearly 13 metres wide by 6 metres in height. This important structure has been protecting the city and surrounding countryside for over 60 years and ECS has previously been involved in the maintenance of the gates and an upgrade to their control systems.

Thanks to its long history of work on water control infrastructure, ECS was invited to undertake refurbishment of the exterior steelwork structure, a project that required careful consideration and a great deal of planning and preparation.

Some of the steelwork could be removed for cleaning and repainting off-site. However, much of the repainting work had to be in-situ – a lot of it had to be carried out over water, meaning special safety measures in case anyone fell into the river. There were also major environmental considerations to prevent old paint flakes, debris and other items from contaminating the waters, riverbank, wildlife and ecosystem.

In the first stage of the project, ECS erected extensive scaffolding around the sluice, including a section to replace a gantry and walkway that had been temporarily removed. The scaffolding was designed to provide engineers with safe, clear access to all surfaces of the steelwork many metres in the air, and also to catch and contain falling debris. To improve the working environment and minimise the amount of debris dropping into the river, the scaffolding was encapsulated with tent-like walls allowing the operations to be carried out even in extreme weather.

As part of the safety commitment a three-man water rescue team was on site at all times during the works, positioned in a small, highly manoeuvrable rescue boat, equipped for any likely eventuality so that they could deploy instantly to recover a person from the water.

People working on the scaffold wore a double lanyard safety harness so that they could attach themselves to the scaffolding. If they had to move from one section of scaffold to another, they would unclip one lanyard and reattach it to the new section before undoing the second one, thus always remaining secure.

The site teams carried out risk planning and mitigation during the planning phase of the project, identifying that it could be possible for a person to fall, be saved by their lanyard but unable to regain the safety of the scaffold walkway even with assistance. To cover this eventuality everyone was issued with a strap knife that they could use to cut the lanyard and drop into the river if needed – but not until the rescue boat was in position to effect an immediate recovery.

Jamie Wesley, Operations Director at ECS recalls: “In conjunction with our client, ECS ensured that the rescue drills were carefully planned, exercised and that all personnel were correctly briefed on their roles prior to any works being carried out. Once ECS were happy with performance of our safe systems of work we invited our colleagues from the Environment Agency to attend an onsite demonstration where a life-sized dummy, rather than a real person, was dropped into the river and rescued.”

The rescue team was on station with a Jason’s cradle to deploy over the side of the boat to initiate retrieval. The cradle is a piece of equipment specially developed to be used in retrieval from water which, when positioned beneath a person, is used to easily and quickly haul them into a boat.

ECS had this demonstration filmed so that a training video could be produced and shown to all personnel working on the project.

Jamie Wesley again states: “Safety is paramount and our pre-planning and demonstration showed that we had all the assets in place to make this project as safe as possible. We have learned lessons and proved systems that we can take forward into future projects. Winning the award confirmed that we had done our best and proven our capabilities for safety in ‘above water’ projects.” 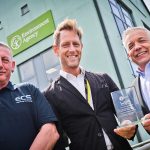