ECS Engineering Services is to replace all the gates on the Fort Augustus flight of locks on the Caledonian Canal in Scotland, under a contract with Scottish Canals.

The Caledonian Canal runs for 70 miles through the Great Glen from Inverness in the east to Fort William in the west. One of Scotland’s most important tourism and leisure drivers, it was constructed by Thomas Telford in the early 19th century so that shipping did not have to brave the stormy waters around the north of Scotland.  By careful routing, most of its length is made up of the natural waters of Loch Ness, Loch Lochy and Loch Linnhe. The change in levels to the east of Loch Ness is addressed by the six-gate lock flight at Fort Augustus.

The current lock gates were installed in the mid-twentieth century and are approaching the end of their life expectancy. ECS has a single source framework agreement for lock gates with Scottish Canals, the organisation which also looks after the Crinan Canal, Forth and Clyde Canal, Union Canal and Monkland Canal.

ECS is to survey the six locks and design gates for each location, these gates will be manufactured by our in-house fabrication team, inhouse before installation. The newly designed gates will be some of the largest in the UK, made of steel with freshly designed sealing and self-lubricating bearing systems. These gates have been designed to provide a long working life, with little need for maintenance in an extremely tough working environment.

Jamie Wesley, ECS Operations Director says: “Whilst these gates may look almost identical to the existing, Fort Augustus is both a World Heritage Site and one of Scotland’s premier visitor destinations and so, in conjunction with renowned design house KGAL, we have ensured that these modern designs are sympathetic to the location whilst being able to stand the test of time in the Scottish Highlands. ECS will also plan our operations to cause as little disruption to locals and visitors as possible. The draining of these iconic locks for this work is a mammoth task, in conjunction with Scottish Canals this will be done in a controlled process to protect the Environment and local tourism whilst providing a safe working site for our teams.”

The first of the new gates is planned to be installed in March 2019, and the rest will follow in stages up to Easter 2020. 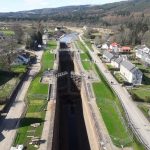 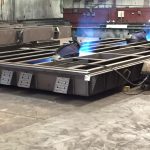 ECS Engineering Services is to survey the six locks and design gates for each location, these gates will be manufactured by our in-house fabrication team, inhouse before installation