As part of its framework contract with the Environment Agency (EA), ECS Engineering Services has recently completed the installation of a new three-gate sluice as part of local improvements to the flood prevention scheme. In this particular case there was no possibility to divert the water flow during the installation, which meant that everything had to be completed with the river still running its natural course.

The EA has been working closely with Havant Borough Council to develop ways of reducing the flood risk to the residents of Emsworth, near Portsmouth, who have recently seen an increase in the number of flooding incidents in the town. Having identified Emsworth as a priority area, the EA has started to implement a number of measures which will help to reduce the flood risk in the area, including the replacement of the deteriorated wooden sluice at Constant Spring.

The structure on the River Ems helps to control and manage the rate of water flow through to Chichester Harbour. This control device is crucial during periods of high rainfall in restricting the flow downstream, which would otherwise overwhelm the flood defences. With the deterioration of the sluice at Constant Spring this important control device had been lost and needed to be replaced as a priority.

Under normal circumstances, ECS would have preferred to have diverted the flow of the river, either by rerouting it around the work site or by damming the watercourse and using pumps to maintain the flow. However, in this case the location of the sluice would not allow either of these options to be employed, which meant that the whole project would have to be completed with the river flowing through the site.

This slight complication meant that enhanced risk assessments and method statements would have to be used to ensure that the project could be completed safely. Using their engineering expertise, the designers were able to propose a new structure that could be assembled by hand in the river, even in moderate water flows, whilst still maintaining the company’s very high health and safety standards.

The installation process was carefully planned and involved the site engineers assembling the structure while standing in the river flow. This required them to wear special protective clothing and tethered harnesses to minimise any risks associated with slipping on the river bed while working and assembling this structure.

Jamie Wesley, Commercial Manager, Water Control Division at ECS, comments: “Although the physical size of this project was relatively small, it remained quite complex in terms of engineering and logistics. We carefully timed the installation of the new sluices to minimise the flowrate of water through the site to try and reduce any complications to the project. The design included a temporary lifting frame that allowed the site engineers to manoeuvre the heavier pieces of the structure into place without compromising their safety.”

The main framework of the new sluice is built from galvanised steel, all of which was designed and manufactured at ECS’s new fabrication facility at Huthwaite, while the penstocks are made from High Density Polyethylene (HDPE) supplied from Waterfront Fluid Controls, ECS’s long standing supply partner providing a long-lasting replacement to the old wooden sluice gates. In addition, the hand-railing across the sluice has also been improved with the installation of new timber which is Forest Stewardship Council (FSC) certified with full traceability, which is a requirement for EA installations.

This project for the EA forms part of the Emsworth flood risk strategy, which aims to reduce the frequency of flooding events in Emsworth from 1 in 2 years, with a 50% probability, to 1 in 75 years and a 1.3% probability. Further work on new flood storage areas and regular clearing of the existing water channels and culverts is ongoing. 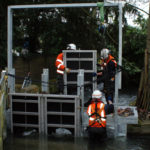 In this particular case there was no possibility to divert the water flow during the installation, which meant that everything had to be completed with the river still running its natural course 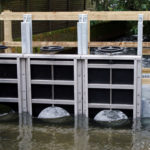 The main framework of the new sluice is built from galvanised steel, while the penstocks are made from High Density Polyethylene (HDPE) 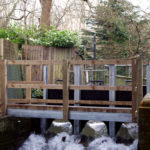 This control device is crucial during periods of high rainfall in restricting the flow downstream, which would otherwise overwhelm the flood defences