The Colwick Sluice in Nottingham is a key component of the flood defence apparatus designed to protect the city; one that the Environment Agency (EA) has been upgrading in order to improve the efficiency of essential maintenance work. As part of this project ECS Engineering Services has installed a new semi-automated stoplog deployment system which provides the EA with ‘dry’ access to the sluice gate mechanism, speeding up operations considerably. 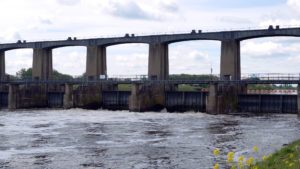 Originally built in 1955, the Colwick sluice consists of 5 sluice gates and forms a key control point for the water levels of the River Trent and is used by the EA to protect Nottingham against flooding. The last major work to be carried out at Colwick was in 1995, when the sluice gates were replaced and fresh concrete was laid in the base to alleviate river bed erosion on the downstream section of the river.

Periodically the EA is required to carry out maintenance on the sluice gates and in some cases this requires the area around the gate to be inspected which means that the water must be held back just upstream of the gate. This is done using a stoplog system which consists of a number of steel sections which are lowered into slots located in the concrete structure of the sluice. Once in position, the gate is opened and the trapped water is released, allowing the inspections to be carried out.

The procedure to install the stoplogs, each weighing 3.8 tonnes, was very labour intensive, requiring a mobile crane to move each steel section from its storage position to the sluice where it was positioned and lowered by two separate hoists. The procedure for keeping the stoplog level during the lowering procedure was essentially done by eye, requiring additional personnel to those involved in controlling the stoplog.

Working close to the water also requires extra safety precautions to be taken to ensure that personnel remain as safe as reasonably possible during the work. To ensure the safety of the maintenance team, each man working on the sluice structure had to wear a harness, which was connected to the structure via a lanyard. In addition, there was a boat team in place on the river in case a rescue was required. In all, a team of 7 was required to operate the lowering system, with additional support from the mobile crane.

The EA planned to improve this procedure, both in terms of efficiency and safety and turned to one its framework suppliers, ECS Engineering Services. With extensive knowledge and expertise in water control products, ECS was given the brief to design and install a bespoke system which would automate the deployment of the stoplogs.

An initial site survey determined that the most efficient system would involve two linked lowering mechanisms which could be located at any of the five sluice gates in order to deploy the stoplogs. Using the existing structure of the sluice, it would be possible to use the existing set of tracks, along which the new lowering mechanism could travel. For this aspect of the project, ECS turned to M-tek Engineering, experts in rail engineering, to design the carriage running gear and control systems.

The improved procedure for installing the stoplogs still requires a mobile crane on site to move the sections from the storage area to the lowering carriage; however, from that point the carriage will take over the operation of automatically moving the stoplog sections to the required sluice gate and lowering them into position.

This is done using a pair of hoists that are controlled by a PLC which uses an encoder to determine the position of the stoplog and determine when each section is in place. Once in position, the stoplog is released from the lifting frame, which is then retracted ready to load the next section.

Phil Anderson, Project Manager for ECS comments: “From a technical perspective this is quite a complex installation, but the overall contribution to both speed and improved safety is considerable. Working in close proximity to deep water always raises additional safety concerns, but this system will allow the total number of people involved to be reduced as well as reducing the overall risk for everyone involved.

Previously, it could take a team of seven, at least four to five hours to complete the installation of all seven stoplogs required to isolate one sluice gate. With the new system installed by ECS, the team has been reduced to two or three men, who can complete the operation within an hour. This represents a 65% reduction in manpower and a 75% reduction in time, but more importantly the whole team can work within the hand railing on the sluice, greatly improving the health and safety aspect of the operation.

Phil Anderson concludes: “The completed deployment system has been tested and commissioned with the oversight of the EA in order to ensure that the controls and safety devices are all working as prescribed. This project will bring some real benefits in improving the health and safety aspect of maintaining the sluice gates as well as reducing the annual costs.” 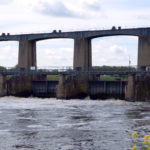 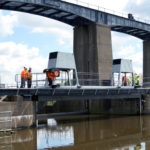 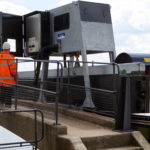 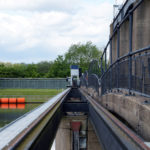 Using the existing structure of the sluice, it was possible to use the existing set of tracks, along which the new lowering mechanism could travel 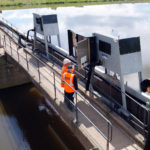 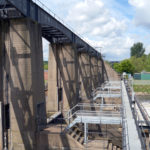 Originally built in 1955, the Colwick sluice consists of 5 sluice gates and forms a key control point for the water levels of the River Trent