The National Coal Mining Museum for England has been offering visitors the chance to learn more about this ancient industry for over 25 years. As with most coal mines, there is a constant build up of water in the underground workings that makes its way to the old mineshafts. This water needs to be pumped out and treated before it is discharged into the local watercourse. ECS Engineering Services has been responsible for maintaining the pumps and the treatment works for the past 18 years and ensuring that the water levels remain under control. 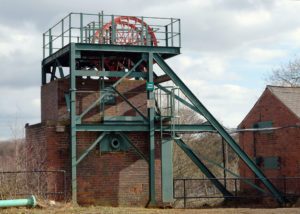 The museum is based at the site of Caphouse Colliery in Overton, West Yorkshire and originally opened in 1988 as the Yorkshire Mining Museum after the colliery was closed in 1985. In 1995, it gained national status and at this point ECS was appointed to maintain the water pumping equipment and the treatment works, which it has been doing ever since. The contract has seen a permanent presence of ECS engineers, who are responsible for preventing the museum from filling up with ground water and ensuring that the treated water meets the standards set by the Environment Agency (EA).

There are a number of disused coal mines in the area, all of which collect groundwater which is carefully monitored by the ECS team. Using level readings from four satellite boreholes, the engineers are able to determine the water flow into the Hope mineshaft, adjacent to the museum, which was originally sunk in the 1820s. This level is constantly monitored and recorded so that the pumping capacity can be maintained at the required level.

The on-going contract with the National Coal Mining Museum starts with two 3.3KV, 260 KW pumps located in the Hope shaft, some 140m below the surface. These pumps are used to keep the water level within the required limits and pump out the excess to the water treatment plant. The water passes over a cascade to increase oxygen levels and into a settling lagoon, which is the starting point in the process to remove the majority of the solids, mainly iron ochre. From the lagoon the water transfers to a balancing tank, which is designed as a storage point to ensure that the flow rate into the settlement tanks is optimised.

After passing through the settlement tanks, the water passes into reed beds, which remove the majority of any remaining ochre before it is discharged into the nearby stream (or ‘beck’ as it is called locally). Water quality readings are taken at the discharge point to ensure compliance with the consent levels set by the EA. In this case, readings for both suspended solids and pH are required. The raw water from the mine contains 30-40ppm of iron ochre but after treatment, the final discharge is 3ppm or below.

Neil Ardron, Project Engineer at ECS comments: “We use remote level monitoring equipment at the four boreholes to give us an ‘early-warning’ of the amount of water that could flow to the National Mining Museum and would need to be pumped from Hope shaft. This information is combined with monthly readings from an additional 14 satellite stations to give a complete picture of the groundwater levels in the area. Along with the pumping data and the water sampling results, all this information is reported to the Coal Authority on a regular basis.

ECS has a permanent presence on site and works closely with both the museum and the Coal Authority to collate all of the data and to maintain all of the equipment involved in the mine water treatment process as well as investigate new treatment methods that can be used in other locations. This work is crucial considering the huge number of disused coal mines, not only in the UK, but across Europe, many of which require the groundwater to be treated before it is discharged into the local watercourse.

Due to the essential nature of the pumping station, the operational status of the pumps is constantly monitored. In the event of a pump failing to operate, an alarm signal is sent via the telemetry system to the ECS engineers responsible for the site maintenance. The alarm initiates an immediate site visit to determine the cause of the alarm and to confirm that the standby pump is online; ensuring that the safe working levels are maintained within the mine.

The maintenance aspect of the contract aims to ensure continued efficient operation of the pumping and treatment equipment. The main issue to be addressed is the continuous build-up of ochre deposits which restrict pipes, block the cascade and fill up the settlement lagoons. The pumps themselves are removed for maintenance on a rotational basis about every 18 months, but this is no small operation.

The Hope shaft in which the pumps are located is within the Museum area, with the head works still in place above the mineshaft. In order to remove a pump, the head works must be lifted off the building to allow the discharge pipework and pump to be lifted out of the shaft. Once the replacement pump has been installed, the head works have to be replaced to maintain the appearance of what is a historic building.

The pipework which transfers the water to the cascade is prone to ochre build-up and is continuously monitored for flow rate. Without intervention, this restriction can cause increased load on the pumps, so as soon as the flow rate drops to a defined limit, the pipes are cleaned to ensure continued reliable service from the pumps. This ochre build-up also affects the cascade which needs to be cleaned every week; otherwise the water will not be oxygenated properly.

The groundwater levels are affected by seasonal rainfall, which leads to increased pumping activity during the winter. While the buffer tank can deal with some increase in water levels the increased flowrate through the settlement tanks can reduce the efficiency of the process. During these circumstances the treatment plant employs a lime dosing system that increases the rate at which the iron ochre settles out from the water and thereby ensures continued compliance with the discharge consent.

This ongoing contract is carefully managed by ECS to ensure that the public can continue to visit the National Coal Mining Museum, safe in the knowledge that a trip down the mine will not involve getting their feet wet. 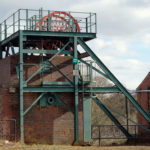 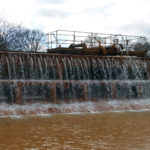 The water passes over a cascade to increase oxygen levels and into a settling lagoon, which is the starting point in the process to remove the majority of the solids, mainly iron ochre 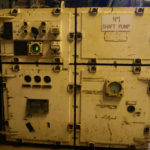