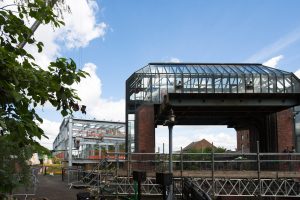 Andy Swindells of ECS explains that this important £17m project had to be scheduled in phases: “Fishergate is a town centre site where life has to go on as normal, so we have to fit the works around residents and businesses, car parks and visitors. We even pre-planned for the week the funfair was in town! Fortunately, ECS has a wealth of experience on major projects in busy locations, so we were able to take it all in our stride.”

With warmer winters expected, many towns and cities are looking to improve their flood defences. Part of the Foss project involves installing eight new pumps to replace the old ones that have been protecting the historic heart of the city for 30 years. Pumping capacity is being increased by about 33 percent to 40 tonnes of water per second, which will be pumped from the flood-prone River Foss into a culvert that drains into the nearby Ouse, from where it will run harmlessly out to sea.

ECS has provided the fabricated steel frame for the pump hall. Phase 1 required this to be built at ECS’s headquarters 60 miles away in Sutton-in-Ashfield, transported to site and erected. The 100 tonne framework was then fitted with cladding, fitted out with building services, decorated and finally the pumps were installed.

“We do most of our fabrication offsite,” says Andy. “so driving the steelwork up the A1 was a bread and butter job for us. Naturally, the final few miles through the city centre were always going to require a bit more planning and timing, so experience counts. Similarly, once at site, our highly skilled erectors are fast, efficient and committed to finishing the job on time and with no dramas.”

In fact, during the later stages of Phase 1 the client requested ECS to fabricate and install some extra supporting steelwork. Many jobs have late amendments to their design, so again ECS was able to take the request in its stride.

Phase 2 began on site at the start of 2018 and will see ECS fabricate the steelwork for the control room, which is to be located on top of the pump hall, well above any ‘worst-case’ flood levels.

Andy continues: “The steel for the control room will weigh about 30 tonnes, so a fair bit smaller than the pump hall – whose frame we designed to be able to carry this extra weight.”

This flood defence installation also includes a 16 tonne barrier that is normally held horizontally above the River Foss, but which can be dropped down to hold back the flow, with the pumps transferring the water to the Ouse.

ECS Engineering Services is preparing the fabrications for the second and final phase of the Foss Barrier flood defence upgrade.