ECS Engineering Services has been recognised for its exceptional level of service by nomination in the Environment Agency Project Excellence Awards 2017. The Nottinghamshire fabrication and water control experts have been shortlisted as part of the ‘Managing Health, Safety and Environmental Risk’ category, with the nomination awarded regarding a major pumping station upgrade the company carried out for the Environment Agency in Keadby, Lincolnshire. 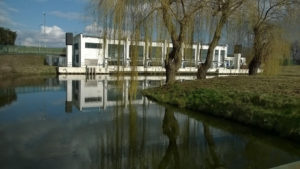 ECS has been nominated for a recent renovation of Keadby pumping station, where the company carried out a complete electro-mechanical upgrade of the station’s existing facilities.

The awards, sponsored by Aecom, will take place as part of the Flood & Coast 2017 Dinner on the 29th March, which will be held at Telford International Centre in Shropshire. The dinner forms part of an exhibition led by the Environment Agency that aims to gather local authorities, infrastructure owners, consultancies, contractors, businesses, community groups and academia to discuss best practice in flood and coastal erosion risk management.

Nominations for awards focus on specific projects that display the utmost in quality and service. ECS has been nominated for a recent renovation of Keadby pumping station, where the company carried out a complete electro-mechanical upgrade of the station’s existing facilities. This included the addition of two new diesel pump engines, replacement of drives with variable speed alternatives, the installation of new associated gearboxes, the addition of more reliable weed clearance equipment plus upgrades to the SCADA control and telemetry systems. The project served to improve the flood control management in the area, while also increasing the efficiency with which operators could maintain local water levels.

ECS has worked in conjunction with the Environment Agency on projects across the UK as an appointed framework contractor, and is currently playing a leading role in the renovation of Britain’s waterways that is being conducted by the agency. As well as being able to offer a full service package regarding water control infrastructure, ECS prides itself on an award-winning health and safety record, coupled with a high level of environmental sensitivity during works.

Jamie Wesley, Contracts Manager at ECS expressed his delight: “It’s great to see our efforts recognised; a large majority of our work takes place in potentially hazardous areas or on land that is protected or environmentally sensitive. Our employees are highly trained in applicable health and safety protocol, while we also ensure that we utilise the latest engineering techniques to make sure we cause as little disturbance to a natural environment as possible. This is part of our commitment to minimise time on-site, where we employ strategies such as prefabricated structures and systems to reduce required site work. Simultaneously, this also serves to expose our workforce to less risk. We would like to thank the Environment Agency for the nomination, and we look forward to the ceremony!”