Maintaining flood defence equipment is a vital aspect of the Environment Agency’s role and in many cases it uses engineering partners, such as ECS Engineering Services to plan, design, fabricate and install new equipment. When a fish belly water control gate was identified for replacement after nearly 30 years of service, ECS was tasked to remove and replace the existing equipment as well as fabricating and installing a complete set of stop logs to allow periodic maintenance of the control gate.

The fish belly water control gate is used to control the water levels in the local area and to prevent the flooding of properties further downstream. Water levels both up and downstream are monitored by ultrasonic sensors and this information is used to determine the height setting of the water control gate. The height is controlled by a large hydraulic ram, which incorporates transducers that provide an exact position signal, which is then communicated to central control via the telemetry system.

The project was scheduled to be completed during the summer months when the water flow through the control gate was at a minimum and therefore the risk of flooding at its lowest. The first steps involved careful measurement of the existing control gate and drawing up the designs for both the replacement control gate and the stop logs before the fabrication department could start on manufacturing the new components.

Initial work started with the installation of the stop log system which would also provide some protection for the team of engineers when it came to installing the new control gate. The stop log system consists of two sets of barriers, either side of the control gate position, which would prevent water entering the area from upstream. As the level rises on the upstream side, the flow is diverted into a lake, which acts as a storage location for the duration of the work.

The original control gate was then removed using a mobile crane which, due to the remote location, required considerable civil engineering work to be carried out in order to allow the crane to reach the site. Once this had been completed, the final measurements for the sealing rubber strips could be taken, allowing the design of the new control gate to be completed, including filling the internal space with closed-cell expanding foam.

A second, 55 tonne crane was then used to lift the control gate and lower it into position to allow the pivot pins to be installed. In order to operate correctly the control gate must form an effective seal with the concrete side walls, which makes the job of installation particularly difficult since manoeuvring a 6 tonne asset with millimetre precision is no easy task.

The pivot pins had been machined to provide 0.5mm clearance so the final positioning to allow the pins to be installed required pinpoint accuracy. Once the control gate was in position, the new hydraulic ram, measuring 3m in length, was installed along with a new hydraulic power pack.

Project Manager, Richard Patterson, of ECS comments: “This has been quite a challenging project, requiring precision engineering as well as considerable work on site to get the new control gate installed. The complexity of the job has been illustrated by the fact that two crane hire companies declined to carry out the lifting operations due to the remote location and millimetre clearances involved. Once we had found a company prepared to perform the contract lift, we were able to complete the installation and commissioning of the project.” 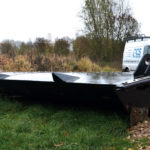 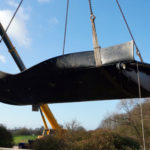 Due to the location, the most efficient method required two mobile cranes 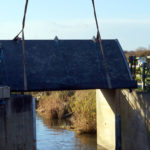