Following an underground fire, the Daw Mill colliery was closed in March 2013. Since then work has been underway to put the fire out and make the site safe, while also removing all of the above ground structures. A major part of this work has involved filling in the 2 mineshafts, which required a specially engineered cover plate to be constructed. This work has been undertaken by ECS Engineering Services in conjunction with JMC on behalf of the Coal Authority. 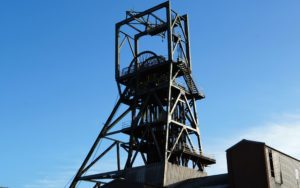 Under normal conditions, a mineshaft would be decommissioned by removing all the underground equipment in a controlled manner using carefully scheduled plans. However, in this case the mine had to be evacuated as soon as the fire broke out and it has not been safe for anyone to re-enter since. As a result, a different approach has been devised, whereby the operation to seal the two shafts is completed purely from work carried out on the surface.

Daw Mill mined a five metre thick seam of coal known as the Warwickshire Thick, with 2 shafts extending down to approximately 550m along with an inclined drift, which was used to convey the coal out of the mine. Now that the mine has been closed, the initial priorities are to extinguish the underground fire by cutting off the air supply and isolating the mine water from the local aquifer.

In fact, the two tasks will be accomplished simultaneously since the mineshafts will need to be closed to remove the oxygen supply to the fire and in doing so material that is used to fill the mineshafts will include two carefully positioned clay plugs that will keep the mine water separate from the aquifer. The specifications for the various materials to be used and location of the clay plugs has been approved by the Environment Agency, which has a responsibility for the local water supplies.

Of the 2 vertical shafts, No.1 shaft was constructed first and used wire ropes and weights to stabilise the lift cages, which were used to convey men and materials to and from the surface. Shaft No.2 was installed with fixed rails to increase smoothness of operation.

The wire ropes in shaft No.1 are connected directly to the head gear structure and extend to the bottom of the shaft where each rope has a weight attached. In all, the total weight of the ropes and the weights amounts to nearly 200 tonnes. Shaft No.2 has no wire ropes and this difference in design has affected the method of filling the two shafts with aggregate.

If the aggregate was simply tipped into No.1 shaft it would come into contact with the wire ropes, increasing the tension in them, which could cause the head gear to collapse. Therefore a different approach was required that would allow the ropes to be disconnected from the head gear but still held in place, otherwise they would fall to the base of the shaft where they could create voids and prevent the shaft from being properly filled.

Gary Jordan, Managing Director for ECS, comments, “This project has required an acute understanding of the mining industry and its related working practices and standards in order to ensure a successful conclusion. ECS has combined this experience with its design and fabrication expertise to deliver a bespoke solution that is fit for purpose and has been installed despite the complications of the location.”

JMC Engineering (UK) has been appointed to complete the closure and oversee the demolition of the Daw Mill site and has been working very closely with ECS Engineering Services to design and construct the structure which will allow shaft No.1 to be filled safely. The cover consists of fabricated structural steel box work to span the gap, supporting reinforced steel joists (I-section beams) that support the cable clamps. The cable clamps are constructed of a series of solid steel bolted clamps attached in series above the I-beams.

The structure was fabricated at ECS’s own 40,000 sq ft fabrication works and had to span the 6.5m wide shaft opening and be capable of supporting the 200 tonne load with the necessary 5 to 1 safety factor, as required in the coal industry. It also had to have a design life of 25 years, just in case the project remained incomplete for any reason. The top section of the framework supports the 2-bolt rope clamps, which are bolted onto the wire ropes which themselves have a 2 to 1 safety factor.

Each of the 14 wire ropes, which weigh 14 tonnes each including weights, is fitted with eight 2-bolt clamps and then raised using a hydraulic jack sufficiently to allow a second set of clamps to be installed below the first. This procedure allows the tension in the wire rope above the framework to be released, making it safe to cut the rope and disconnect it from the head gear framework.

Once the rope clamps have been installed, a highly visible marker is attached to each rope and the distance to the clamp measured and recorded. As an additional check, these distances are measured every day to ascertain if there has been any slippage of the wire ropes.

To add to the complexity of installing the mineshaft cover, the area around the entrance is classified as Zone 1, a potentially explosive atmosphere and is constantly monitored for the build-up of gas. This can lead to significant delays in completing the work but with the safety of the engineers of paramount importance, the work has been carefully managed with all the necessary precautions rigorously enforced.

In addition to the work on the two main shafts, the drift will also be sealed and this will finally cut off the air supply and extinguish the underground fire. Once these operations have been completed and the surface structures have been demolished, the site can be prepared for a new life, most likely one that will make use of the adjacent railhead and connection to the nationwide rail network. 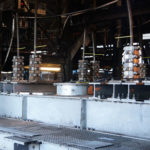 The cover consists of fabricated structural steel box work to span the gap, supporting reinforced steel joists (I-section beams) that support the cable clamps. The cable clamps are constructed of a series of solid steel bolted clamps attached in series above the I-beams. 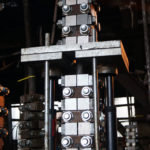 Each of the 14 wire ropes, which weigh 14 tonnes each including weights, is fitted with eight 2-bolt clamps and then raised using a hydraulic jack sufficiently to allow a second set of clamps to be installed below the first.