Bridging the gap between infrastructure and wildlife

Conserving our natural environment around the ever expanding infrastructure in the UK has become an issue of increased importance. Particularly, roads and railways can present an insurmountable obstacle to wildlife, with thousands of animals becoming victims of road kill and presenting a sizeable hazard to transport users. With animal populations in decline, solutions such as Green Bridges have been pushed to the fore to protect the natural environment and wildlife in areas affected by infrastructure development. 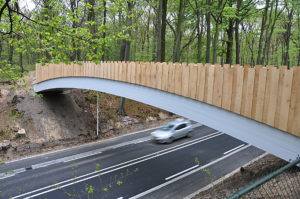 Green Bridges are essentially a wildlife crossing over a highway, allowing animals to cross overhead without having to venture onto the road or track itself. These bridges are usually planted with vegetation to encourage animals to cross, with the structure itself then becoming part of the natural habitat. Infracore® composite bridges, designed by Fibercore Europe and supplied throughout the UK by ECS Engineering Services offer the perfect solution to creating these structures, offering a low maintenance and reduced cost solution.

In July 2015, Natural England, the government’s conservation agency, released a report on the impact of green bridges entitled ‘Green Bridges – A literature review’. The report summarised the positive benefits of green bridges across the world, from preventing the genetic isolation of brown bears in Canada to allowing rare amphibians such as newts to cross motorways in Holland. The report followed on from recommendations outlined in the 2010 government report ‘Making space for nature’ by Professor Sir John Lawton, which highlighted the need to include ‘provisions of connections across the UK landscape to ensure wildlife can function’.

Green Bridges – A literature review states that Green Bridges aid ‘pollination, trees and standing vegetation, water cycling, species diversity, recreation and tourism’. Furthermore, the structures were found to be utilised by ‘all representatives of fauna, from insects to large carnivores’. In some areas Green Bridges had decreased the number of wildlife related accidents on the road by 70%.

Green Bridges, also known commonly as Ecoducts, have been a feature of highways in mainland Europe for a number of years, with Holland particularly championing the structures as part of any new infrastructure project. Fibercore Europe has long been involved with such structures in the Dutch civil market, utilising ground-breaking Infracore® fibre reinforced polymers (FRP) to achieve durable and low maintenance solutions. With interest in green bridges growing in the UK, Nottinghamshire engineering experts ECS Engineering Services is now offering innovative Infracore® bridges to the domestic market for use in such applications.

As framework contractors for the Environment Agency, ECS has a pedigree in environmental conservation, as Steve Crapper, Business Development Manager at ECS explains, ‘we regularly conduct projects in environmentally sensitive habitats for marine and terrestrial organisms. The main objective is to complete work with minimal disturbance to the natural environment, ensuring that infrastructure work benefits animals as well as end users. For example, we regularly construct eel and fish passes at locks and docking areas, so they can migrate unhindered to spawning grounds along the waterways. Infracore® green bridges offer the same benefits for terrestrial infrastructure, with FRP providing the durability and ease of construction to cause minimal disturbance to an environment while work is conducted.’

Infracore® FRP technology is perfectly suited to the application of green bridges.

As green bridges are subjected to increased moisture and chemicals in soil, materials of construction must be incredibly corrosion resistant. FRP has excellent resistance to corrosion and moisture compared to steel, so can be specified as part of a green bridge regardless of the fauna, flora or natural features that may be specified in construction of the bridge. Infracore® technology also ensures that FRP bridge decks and bridges cannot delaminate, a traditional problem when utilising the material. Such properties ensure a maintenance free solution, minimising total costs and ensuring the application environment is disturbed as little as possible.

FRP is inherently low weight and high strength, making it ideal for construction processes. Furthermore, this simplifies transport and final erection compared to steel. Infracore FRP bridges are prefabricated away from site and then installed as one complete module. Such properties allow further flexibility of initial design, boosting aesthetics of the finished bridge.

With Fibercore Infracore® bridges such as the 24 metre ecoduct over the N225 in Holland already installed and proving a hit with the local wildlife and commuters – adoption of FRP green bridges is only set to increase. Now with access to modern materials that minimise the disturbance to environment while offering ultimate flexibility for design and construction, integration of these structures into the transport network has never been easier. Green Bridges allow infrastructure to attain that rare equilibrium of ultimate convenience and environmental sensitivity – a balance that will have to be struck across Britain’s roads and railways to ensure an environmentally sustainable future.